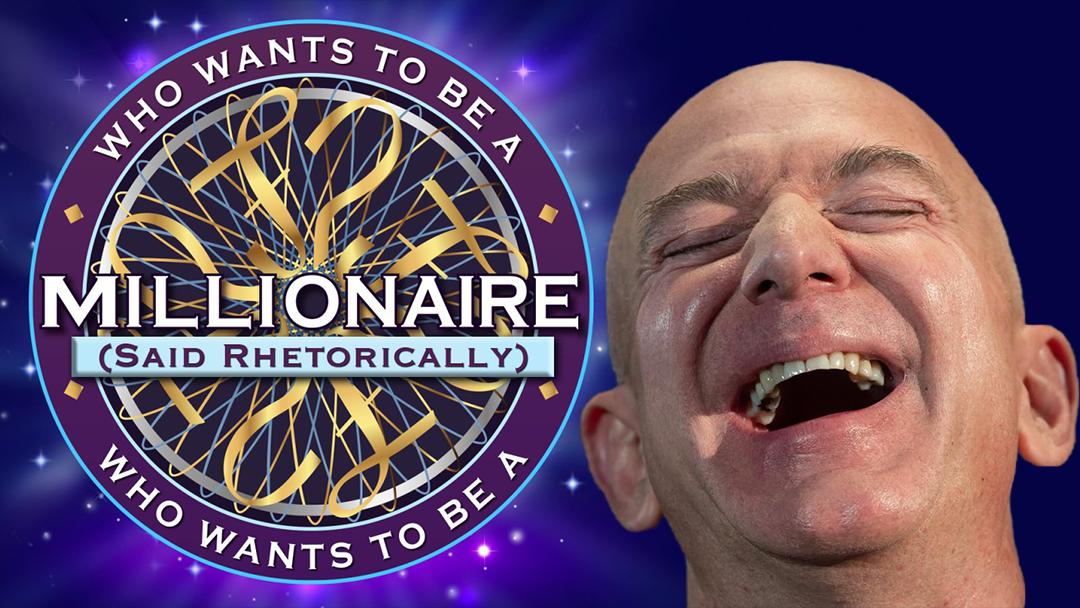 With a massive spike in wealth disparity decimating the American middle class, it’s just no fun to watch “regular folks” on TV anymore (unless it’s so depressing that it’s fun, like Cops). Polling shows most Americans just want to escape into the fantasy of unachievable wealth, i.e. having their basic needs met, hence the new batch of BBFB (by billionaires, for billionaires) pitches flooding the market:

The Price Is Right… Because It’s Disproportionate To the Stagnant Minimum Wage! Contestants guess the price of small homes, compact cars, and groceries. When they see that their bids are far too low, they’re often surprised that anyone can afford to live in America, let alone on the federal minimum wage. Despite this, they still refuse to recognize the need for change. However, in a recent episode, Charles Koch did state his intention to consider making a plan to decide whether or not to sign the Giving Pledge.

25 Words or Less About My Relationship with Jeffrey Epstein Twelve billionaires pitched this show to NBC in early 2021, saying they needed to practice being tight-lipped in front of cameras when asked how they knew Epstein should they be deposed in the trial of Ghislaine Maxwell. Words or phrases designed to gloss over their relationship with the convicted sex offender include “entrepreneurship,” “island life,” and “social gatherings with zero kids, none whatsoever—no, really.” Bill Gates is expected to tape an episode this summer.

‘Who Wants to Be a Millionaire?’ (Said Rhetorically) The equivalent to saying “final answer,” contestants must use this phrase in such a way to make it clear that no, they don’t want to go back to a time in their life when they only owned oceanfront property in three countries. Lifelines include ‘phone a personal assistant’ and ‘consult the first page of results in a search engine, but only if you’ve jerked off in a coffin at Yale with its creator.’

Family Feud… Over Whether to Put a 7-Figure or 8-Figure Amount in the Children’s Trust Funds Rather than two different families competing against each other, contestants in this game are all from the same family (excluding legal counsel). The team in favor of the lower dollar amount is comprised of the mother, father, and a governess whose ample salary precludes her from taking the other side. Besides the children, the opposing team often features a folksy grandparent or cute pet in order to gain sympathy from the judges, should any scoring disputes arise.

Deal or No Deal? I Really Don’t Need the Money Anyway Gameplay initially featured an extra zero being added to the value inside each briefcase, but this still led to contestants either taking the first deal or rejecting each one until the very end because such low-stakes decisions were, in Elon Musk’s words, “mind-numbingly boring.” A revamped version of the show has contestants playing for charity instead, but with the original values back in place.

Truth or Consequences or, Most Likely, Neither Inspired by the Panama Papers, billionaires are asked to be transparent about their offshore holdings. If they aren’t, they may face consequences, but probably not. Definitely not. Donald Trump, the series’s only repeat contestant thus far, can attest to this. The most he had to do was write an apology letter to the I.R.S., but even then it was just one line: “Sorry you suck!”

The $100,000 Pyramid Is Massively Undervalued Gameplay goes one step further than the original version, in which contestants guess a certain word while their teammate gives them clues without saying too much. Here, the answers are names of historic or natural sites that nobody thought were actually for sale, but actually are if the price is right. Notable purchases include the Appalachian Mountains, the Great Pyramid at Giza, and London. Jeff Bezos demanded to be on the first episode in order to bid on an extensive tract of land in South America, which is now known as the Amazon-Whole Foods-IMDb Rainforest™.

Press Your Luck While I Exert My Control, Because Chance Has Nothing to Do with My Wealth Each episode features a middle class contestant playing under the old rules, wherein it’s anyone’s guess which space on the board will light up after hitting the button. Things are different for the billionaire competing against him: by wearing a special pair of glasses manufactured by Google using top-secret technology from Area 51, he is able to see the board in slow motion, even as time continues normally for everyone else. Accordingly, should he land on a ‘whammy,’ it is purely intentional, and done to ensure the appearance of a level playing field.

The Weakest Link in the Corporate Chain of Command In this case, the billionaire is actually the host, while the contestants are his manager-level employees, one of whom he gets to fire at the end of the episode. Reasons for being voted off have included saying that President Biden’s tax plan is “actually not that bad,” and being out of the office for only one week, not two, after announcing layoffs at the junior level.

Name That Tune, Which Is on the Playlist for Our Eyes Wide Shut Gatherings The playlist’s genre is all classical, except for Peter Gabriel’s “Big Time” and Tears for Fears' “Everybody Wants to Rule the World.” Since contestants are encouraged to not only get in the right frame of mind during the game, but to keep their identity hidden as well, they are allowed to wear a mask. Mark Zuckerberg opted against one, saying the face everyone recognizes him by is actually his mask.

William Vaillancourt’s humor writing has appeared in Points in Case, Weekly Humorist and The Satirist, among other places. Coincidentally, it has not appeared in other places as well.