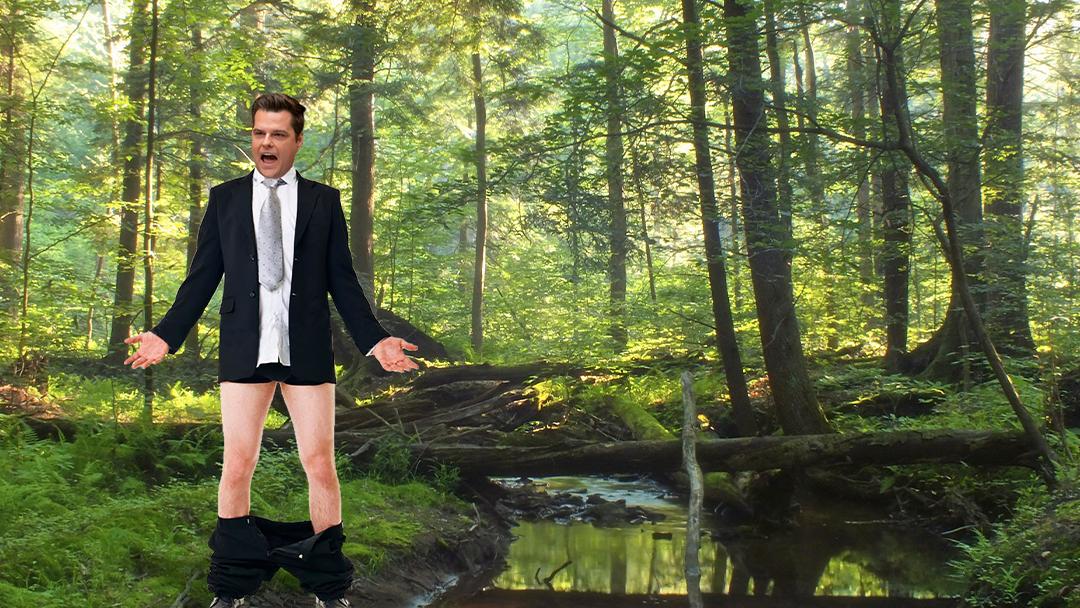 BEAR CREEK, PA - Disgraced Florida representative Matt Gaetz was spotted this past weekend by some locals in the backwoods of Northeastern Pennsylvania as he attempted to fuck a brood of cicadas making their way out of the soil to complete their seventeen year life cycle.

The emergence of billions of cicadas to alter their form, breed, and die, is one of North America’s greatest and most relatable natural phenomena. Entomologists and amateur nature lovers alike wait with bated breath for this elongated biorhythm to play out with poetic brevity.

Once seventeen years have passed and the spring ground reaches 64 degrees Fahrenheit, the red-eyed brood burrows their way through the top soil with a massive sonic buzz, surfacing from dirt mounds called cicada huts.

“I love fucking seventeen year olds!” Gaetz allegedly shrieked as he pounded his mashed potato penis into the freshly tunneled huts, treating the Earth as his own personal Fleshlight. His Brooks Brothers trousers were around his ankles and several half-empty cans of Miller Lite were littered around his “fuck hole” (a term Gaetz shouted no less than six dozen times).

“He came a long way to have intercourse with some insects,” Jerry, age 57, told Functionally Dead Monday. Jerry and his wife Helen, age 58, were the bug-watching bystanders exposed to Gaetz’s sex tourism.

“We knew it was him because he screamed his Venmo handle at us—‘Stop taking pictures and I’ll send you a G!’ blah blah blah. Once we realized what was happening, we weren’t that surprised,” Helen added, “he likes them pretty young.”

The cicada incident is one in a string of now-public illegal perversions for the down and out representative, who is the target of a federal investigation for trafficking underage girls across state lines to have sex with him for money.

When pressed for comment, local police felt it pertinent to inform us this incident is not technically sex trafficking, as Gaetz himself is the one who traveled, but that interfering with the rare and protected cicada life cycle is “a crime against nature.”

“At the very least, he made my husband cry,” Helen confided. “Jerry’s been waiting almost twenty years for the cicadas’ metamorphosis. And that tiny-toothed, rejected Family Guy-looking skeeve killed at least a hundred of them. I hope he goes back to Florida and gets fucked to death by an alligator. I really do wish that.”

Gaetz’s dwindling camp did not immediately respond for comment, but sources close to the representative indicated that the idea of getting torn apart by an alligator—so long as it was too young to consent—sounded “cool.”