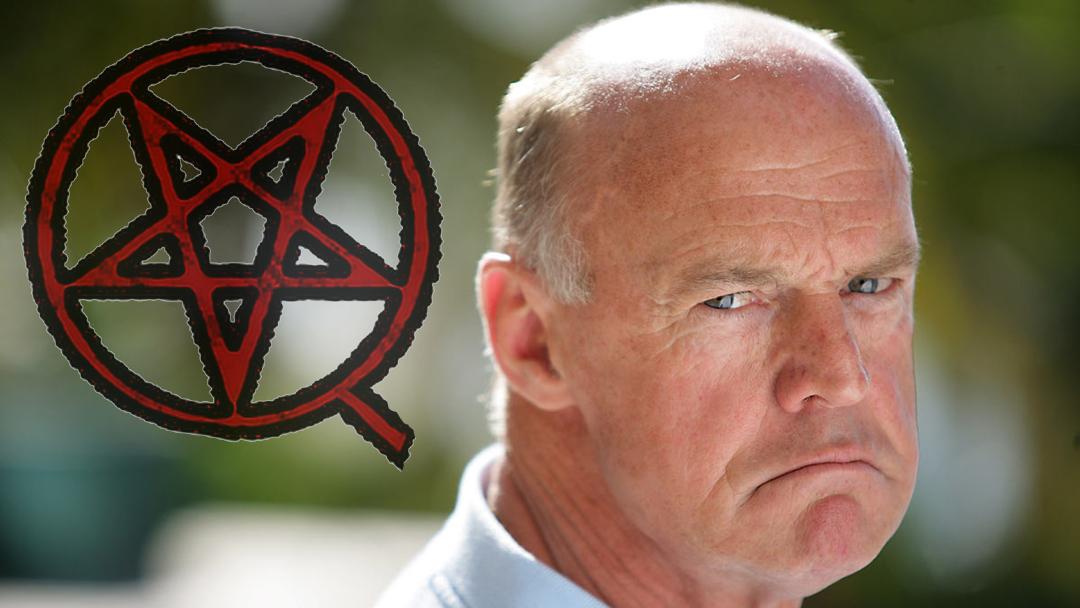 I’m not your average QAnon guy. When I want to learn more about an issue, I don’t just read a 4Chan post or two and call it a day. I do exhaustive research by reading dozens of 4Chan posts with multiple viewpoints on the evils of liberals and their gene-altering immunizations,sometimes until 2:00 a.m. I like to see the issues from all possible angles, ranging from the right-wing perspective, to the alt-right perspective, and even the Neo-Nazi perspective.

Right now, I’m excited about Trump’s upcoming inauguration (rescheduled date TBA), because he’ll finally bring murderous, Satan-loving elites to justice. On the other hand, I sometimes worry that I’m blinded by my own prejudices.

What if I’m completely wrong? What if murderous, Satan-loving elites are the best thing for our country right now? I mean, I was raised to believe that slaughtering children and harvesting their blood was bad, but liberal rapist cannibals might have a negative view of me, too.

Maybe they think it’s weird that I don’t enjoy the blood of babies but instead prefer instant mashed potatoes. I heard that liberal rapist cannibals eat only “real” mashed potatoes with their human sacrifices. It might be Australians I’m thinking of, but my point is: something that seems normal to me might seem bananas to someone from a different culture (read: a rapist cannibalistic one).

You know how we think Canadians have a funny accent, while Canadians probably think Americans are the ones whose accents are funny? Well, Canadians grew up not knowing that America is the greatest country on earth, so we cannot fully blame them for their ignorance. I think we can learn something from the Canadians, or we would, if we could understand those ridiculous accents coming through their maple syrup-drenched mouths, eh? Haha!

There must be some logical reason people choose to align themselves with the Hollywood child-sexual-assault cabal. Maybe the combination of pizza and child-flesh in the secret basements of restaurants is delicious. (I know I sure love pizza, and that’s half the equation.)

Maybe it’s the funding for education that they like. Or maybe it’s the sense of camaraderie they get when they commit heinous acts alongside such comedy legends as Ellen DeGeneres and Tom Hanks. That Ellen is a stitch.

Of course my Q friends and I are all buying tickets for President Trump’s second inauguration, and it’s going to be epic, but sometimes I wonder what it’s like to be on the other side. Will the Godless, child-murdering liberals genuinely believe an injustice has been done when their Antichrist is deposed? Will some good ideas perish with the death of their iniquity?

My friends laugh at me when I talk this way. They say I’m nuts for trying to empathize with the deranged, immunization-altered pedophiles. And sometimes I do wonder if I’m slipping, but in my advancing age, I can’t help but wonder if it’s time to reach across the aisle and chug some baby blood for the greater good of our glorious nation.

Raised in an underground house on a pig farm, Chris Eno McMahon is an erstwhile teen bride, PTO president, and Homemaker of the Year for the state of Michigan. Look for her work in Weekly Humorist, Points in Case, Jane Austen’s Wastebasket, The Belladonnas, The Haven, and Little Old Lady Comedy. She’s currently enrolled in an MFA program and living with her family in Michigan’s Upper Peninsula.