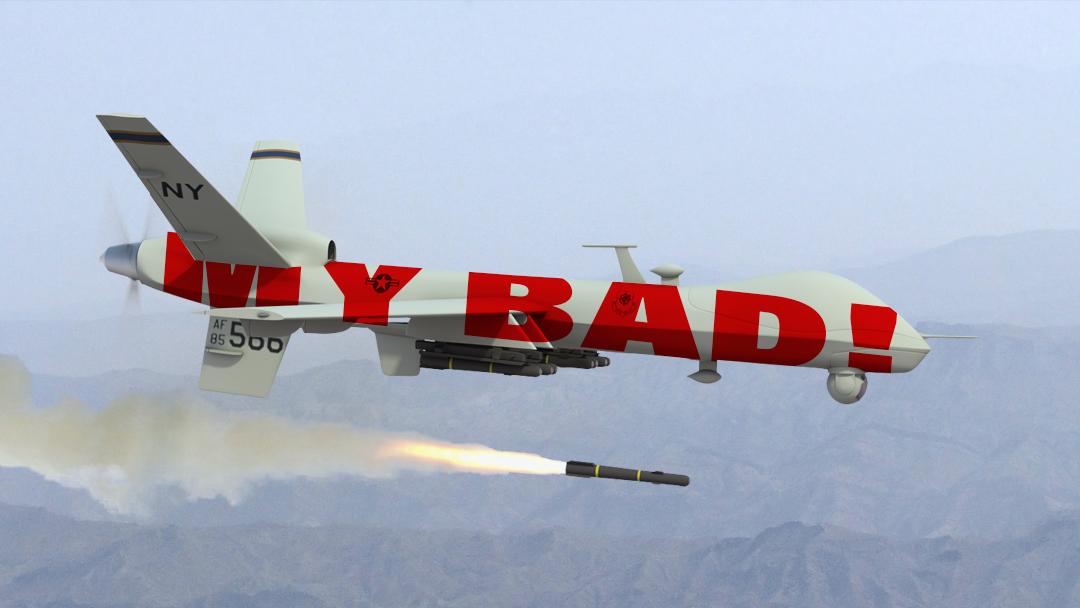 It takes a big man to admit when he f’ed up, which is why I, an Afghan citizen, have to give the biggest of ups to US General Frank McKenzie.

In case you haven’t heard (I don’t blame you Americans who haven’t—news about Afghanistan is so last month!), General McKenzie said that a recent drone strike near Kabul airport, which killed 10 innocent civilians, including 7 children, was a mistake. He then went on to apologize to those of us, including me, who lost a family member or loved one in the errant attack.

It’s all good, dude! We all mess up sometimes, especially when we’re doing things like bombing a country we’ve officially ended a war with. But hey, shit happens! No use crying over spilled milk, or spilled children severed at the torso.

We all know that you only had the best intentions, and that’s what matters. Yeah, it’s a bummer that I don’t “have a child anymore,” but it’s truly no biggie. I can just have another one! Not with my wife, who has bladder cancer due to toxic burn pit exposure, but for sure with someone. No harm, no foul. Well, I guess there was technically some harm. But not to anybody white. So the foul here is minor, like a double dribble.

Honestly, I feel more bad for you. You’re probably pretty embarrassed by this whole thing. I mean, you killed a whole bunch of people for no reason! Talk about egg on your face. If you did this in America, you’d get twenty-five to life! I bet you’re really glad your little goof up happened in Afghanistan. Otherwise, this could’ve been a lot worse. For you, I mean. Me? Your drone strikes eviscerated my child so bad that bits of her flesh got stuck to the walls of my house (this really happened!). But don’t beat yourself up. It was time to renovate and repaint, anyway.

Your drones are OK though, right? That’s what I’m really concerned about. I wouldn’t want anything to happen to your precious death robots. You guys put a ton of time and money in so those steel angels of death could systematically slaughter my people, and I’d hate for this big ol’ boner to flush all your hard work down the drain. If you’d like to invoice me for any drone damage, please feel free. It’s gonna be hard to reach me because you keep wiping out my country’s basic infrastructure, but keep trying. I’ll keep an eye out! It’ll be the left one, since I lost vision in my right eye after a Marine clubbed me over the head with his MP5.

Between us bros? You don’t even need to apologize. I totally get it. If we didn’t want to get blown to bits, we shouldn’t have been existing in a country that has natural resources you want to steal. We knew the risks when we were arbitrarily born here. So seriously, don’t even give the senseless, unjust killing of my friends and family a second thought. If my three year old daughter were still alive, she’d tell you the same thing. And for all we know, she could have easily grown up to be a member of ISIS-K. So maybe, just maybe, this was all for the best.