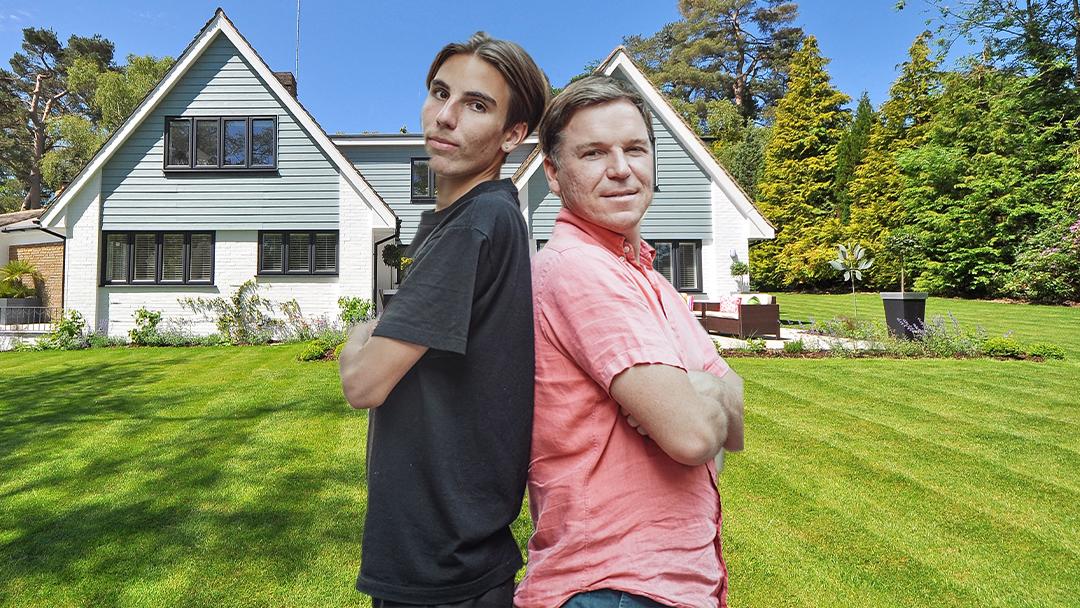 Step 1: Eliminate Distractions Gather your son’s Nintendo Switch controllers, his iPad, his iPhone, his laptop, and the TV remote. Put them under a pile of dirty clothes in the laundry room; you know he won’t find them there and might actually focus on what you have to say. CRAP, your wife just walked into the laundry room and asked what you’re doing in there. Cram some clothes into the washing machine and get out, quick!

Step 2: Go to the Garage You’ll need a quiet place to be alone with your son. Tell him you have a new circular saw blade and you want to show him how to switch out the old one, even though he didn’t ask. OH, COME ON! Your wife’s in the garage now? Looking for what—a screwdriver? You already told her you would fix the master bathroom light switch later. She probably doesn’t know you have to turn the breaker off first, so make sure to tell her that.

Step 3: Go Outside Tell your wife you need to help your son break in his baseball mitt (by the way, “breaking in” a glove just means oiling it and working the leather to make it less rigid and fit more snugly—not sure if you gals knew that). Throw in a mention of famous father and son baseball duos she probably wasn’t aware of, like Ken Griffey Sr. and Ken Griffey Jr. She’s so cute when you talk sports to her.

Once outside, put your arm around your son’s shoulders in a way that makes him feel like you’re a man with wisdom to impart and he should listen up. The important thing to clarify about mansplaining is that women usually don’t like it, and that’s the only reason you sometimes have to—DANG! Your wife’s on the porch and can hear everything you’re saying. She says she’s relaxing with a gossip magazine and a mimosa after fixing that light switch herself.

Step 4: Pretend You’re Going to Mow the Lawn Walk around the yard and tell the boy about how much direct sunlight grass needs to grow (even shade-tolerant grasses, which are totally misunderstood by most women). Then, when your wife’s out of ear-shot—NOPE, she followed you out there to talk about needing to hire an arborist to take down the dead trees by the fence. She probably doesn’t realize the arborist only makes recommendations and a tree removal service actually does the cutting and grinding. Just nod and smile. You’ll tell her tonight.

Step 5: Actually Mow the Lawn If you yell loud enough, your son can still hear you over the mower engine without your wife picking up what you’re saying. Make the boy grab up all the sticks, rocks, and pine cones in the yard so it looks like he’s helping, which I guess he technically is. Tell him how to use the mower properly and ignore whatever he says about already knowing how to use it (he doesn’t fully understand all the ins and outs). OH, FOR THE LOVE OF PETE. You’re almost to the mansplaining talk when your omnipresent wife walks up with a pitcher of lemonade and two cups.

Step 6: Grab the Trimmer and Do the Sidewalk Edges The trimmer isn’t quite as loud as the mower, but it’ll do. Your son will roll his eyes when you bring up mansplaining and act like he’s an expert, but wave him off with a “No, wait, let me explain” and—whoops, you just massacred your wife’s azaleas with the trimmer AND OF COURSE SHE’S STANDING RIGHT THERE. Shake your head and tell her you have to do that from time to time to thin out their numbers, or they’ll all wither and die.

Step 7: Go for a Walk to Cool Down NOPE, your wife says it’s a nice day and wants to go, too. Abort.

Step 8: Take a Shower Go into the master bathroom—hey, she did fix the light switch—lather up, and think of a good place where your wife won’t follow and you can school your son on the ABCs of mansplaining.

Step 9: Tell your Son to Wait for You in the Garage Your first choice was probably right, so go with your gut. Kids like waiting in garages anyway, like you’re letting them in on some juicy Watergate secrets. Tell him to crouch behind the van and not to touch the circular saw.

Step 10: Make Sure Your Wife is in Another Room and Head Back to the Garage Quickly, quietly, tell your son about mansplaining. Hold the circular saw blade in your hand so if anyone sees you, they’ll think you’re talking about guy stuff. Right when you say, “I feel like I might mansplain sometimes, too,” that’s when your wife walks in and asks who put a Nintendo Switch controller in the washing machine. Shrug and say she probably did it herself because she hates how your son tunes her out when he plays video games. When she asks what you were just saying before that, tell her she wouldn’t understand.

*Andy Spain is a video editor and motion graphics designer living in Durham, NC, with his wife and four children. His humor writing has appeared in McSweeney’s Internet Tendency, Weekly Humorist, Slackjaw, et al. His debut novel Cash Grab is forthcoming from Humorist Books in Fall 2021.