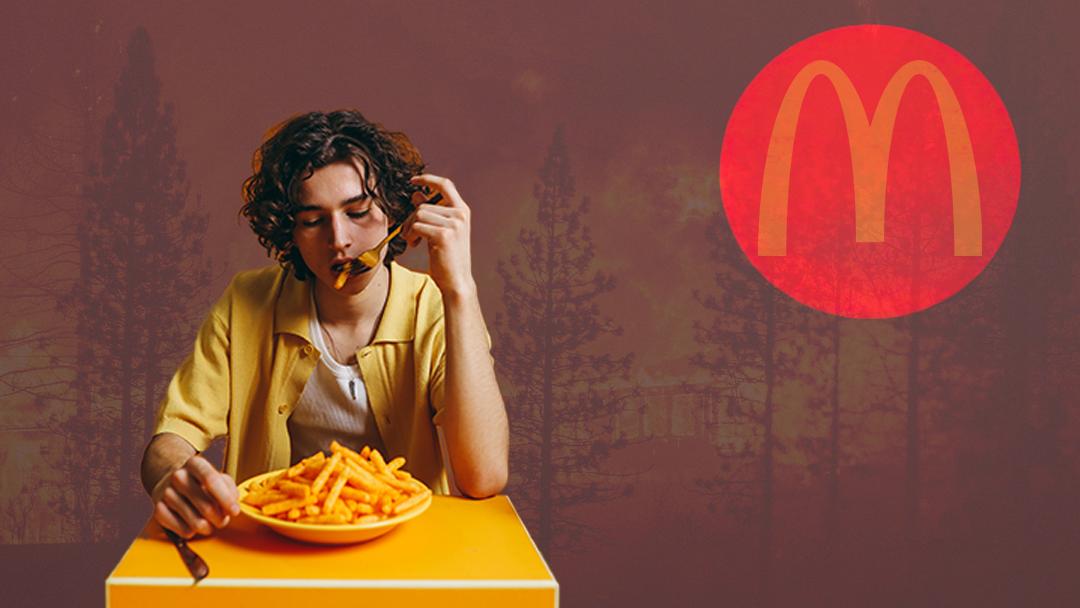 Another hazy morning greets Ricky Dinkle as he stares out upon his yard in Swillup, Pennsylvania.

“The poor air quality we’re seeing is a result of the smoke from the raging wildfires out West,” Dinkle murmurs as he sips orange juice from a disposable Tim Horton’s cup. “It’s looked like the damn end of the world for three weeks now, and we’re suffering from the least bad consequences of it all. Can’t imagine what it’s like out in Oregon. Fuckin’ climate change, man.”

In a recent poll, nearly 7 in 10 Generation Z social media users said they feel “anxious” about the future as a result of climate change. Almost as many believe that the climate crisis should be a top public priority to ensure the habitability of the planet for generations to come. To alleviate their never-ending sense of existential dread, some turn to activism in the hope that they can spur change through direct pressure. Others share information on their various social media channels, keeping the rising climate catastrophe part of their social circle’s conversations. Ricky Dinkle, however, has a different trick to abate his global warming woes: turning all of his available time to the task of perfecting what he calls “homemade McDonald’s.”

“I was involved in my local DSA for a while, I went to protests, I wrote to my Congressmen,” Ricky regales me as he gets to work in his kitchen, “but once you realize that even the ‘good guys’ don’t intend to do enough to keep the world hospitable… no amount of activism will do anything to relieve your panic attacks. So you devote yourself to a hobby that doesn’t matter. For me, that’s perfecting homemade McDonald’s.”

So far, Ricky claims to be close to having a perfect replica of the Egg McMuffin. “I am doing one item at a time. Right now I’m 90% there on the homemade McMuffin. The egg loaf is the tricky part, but I’m this close to cracking the code. Once I’ve got this bad boy down, I want to tackle the homemade McGriddle. It’s gonna be wild.” Ricky then produced his homemade McMuffin, and I must say, it’s pretty darn close to the original, rubbery egg loaf and all.

So has the hobby been successful? Is this the answer to help an entire generation free themselves of the burden of climate change? According to Ricky, this may not be the light at the end of the tunnel that I’ve projected onto him. “What? No. I do this \to distract myself. I’ve lost all hope. Isn’t that obvious? I mean I’m making homemade McDonald’s to eat alone. There is no louder cry for help than this. I’m going to watch society collapse in my lifetime. There will be extreme humanitarian crises on a level we’ve never seen while the wealthy continue to hoard resources. Did you think that I think making homemade McDonald’s is some kind of virtuous act? I’m fuckin’ depressed! I know where this is going now. You’re going to write about this as if it says something about an entire generation, when I’m just one sad sack cooking homemade McDonald’s to prove to the world that I have given up, aren’t you? Aren’t you?!”

My 90 minutes spent with Ricky solely to manufacture a story on climate change that completely trivializes the anxiety felt by Generation Z and Millenials gave me much to think about. After being seated in first class for my Philadelphia to D.C.flight, I couldn’t help but recall that Tim Horton’s cup Ricky sipped his morning juice from. It was a disposable cup made from plastic produced using petroleum that can only be accessed via deep-sea drilling. For a generation so concerned about the impact businesses and the government have on the climate, one would think they’d know better than to use single use plastic. I never had a chance to ask Ricky about that cup, or more importantly, if he still uses plastic straws.

I bet he does. I mean, that’s how they serve the drinks at McDonald’s after all. Authenticity comes at a very high price and for young wokes, that price is their super-sized progressive stance on climate change.