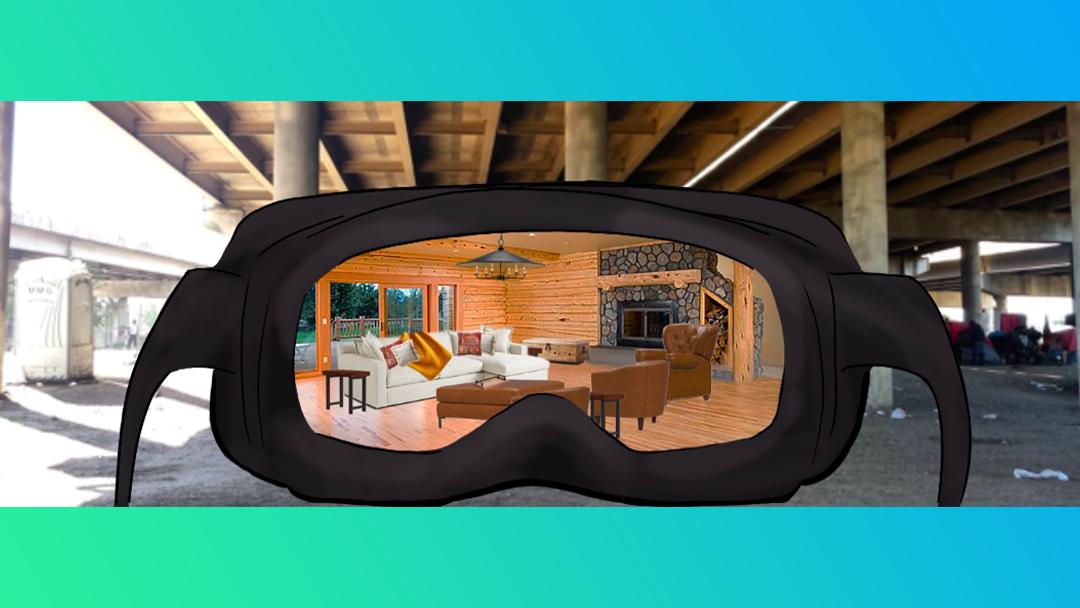 Unhoused people. You’re seeing them more and more these days, and even though you’ve fled New York/Los Angeles/San Francisco for the gloriously low tax rates of Austin, Texas, you just can’t seem to step over them in the street and go on with your day like you used to. We have a housing crisis in America, and it’s becoming a serious nuisance for those of us who have the misfortune of accidentally looking them in the eye as we wait for our Uber. And it’s probably pretty bad for the unhoused people, as well!

As is with all things, Big Tech has a solution. And it’s not some inelegant, Luddite fix like “housing.” That’s a 20th century solution to a 21st century problem, like reducing global emissions instead of sending a SpaceX rocket to colonize Mars. Denying the reality of the housing crisis has only gotten us so far. Instead of denying reality, we need to create a new reality—virtual reality.

That’s where ViHo comes in. ViHo (short for “virtual home”) is a revolutionary tech startup with eighty billion in VC funding despite having no tangible product or business model, so you can only imagine how valuable it’s going to become once it actually gets those things. Founded by Damon Buffett, the result of Warren Buffett’s attempt to impregnate a hundred dollar bill back in 1985, ViHo’s mission statement is “always do good, but in VR, for a lot of money.” Who says capitalism can’t be compassionate?

So what is ViHo? Unlike those other start-ups that claim to be “Uber, but for X,” ViHo is Bird Scooters, but for Health and Human Services. ViHo’s mission is to give every unhoused person in America a virtual reality headset. This headset uses cutting-edge technology to allow the unhoused person to feel, despite living on the street, like they are currently inside their very own home. Well, not their own home—it’s actually a virtual apartment that they rent from a virtual landlord. We assembled the virtual landlord’s personality by studying thousands of landlords across the country and compositing their behavior. So when the toilet overflows and there’s a foot of water seeping into the bedroom, the virtual landlord won’t respond to texts—just like in real life!

That’s the beauty of ViHo. It’s all about using the latest and greatest in technological advancements to replace a precarious existence with a slightly less precarious one. While the unhoused might be sleeping on a bench covered in metal spikes, in their minds, they’re snug as a bug in a cozy, twin-sized bed. Why twin-size, and not a California king? ViHo VR is hard-coded to simulate an apartment the equivalent of a Rutgers dorm room, specifically one built in the ‘70s by the same company that developed much of New York’s public housing. We don’t want the simulation to be too comfortable—then there would be no incentive for the unhoused to find work!

Speaking of work, we’re not giving the unhoused access to virtual reality paradise without some sweat equity compensation. Each VR headset is equipped with a state-of-the-art heart rate monitor. The energy they burn off each day is used to mine a variety of cryptocurrencies. Each unhoused person starts with what we’re calling a ViHo premium-interest loan (covering the cost of the $300,000 VR equipment we’re generously providing upfront, plus a 500% interest rate). After they pay off their debt, whatever they earn, they can keep (minus a standard 15% service fee, of course). If that seems exploitative, know that we’re reducing that service fee to just 13% for the month of June—Happy Pride! It’s all about giving back to a community that gives so much.

Some of you hippies out there might be asking, “why not simply give unhoused people the money instead?” And that’s a great question.

One other thing to note is that the battery life on the VR headsets is, to use the industry term, poor. Unhoused people will need to charge their headsets regularly, but that won’t be a problem if they have their own USB-C charging cable and USB-C power brick. Headsets that run out of juice won’t be able to mine crypto, and their owner will be subject to fines that are tacked on to the principle of their ViHo premium loan. But other than that, everything is straightforward and easy to use, thanks to the headset’s brilliant UI design by none other than Radiohead guitarist Jonny Greenwood (we meant to hire former Chief Design Officer at Apple Jony Ive, but there was obviously a mixup, and it’s too late to go back now).

We’re planning on taking ViHo public this fall, so start your investing engines! If ViHo is anything like every other tech startup, it’s bound to go great.