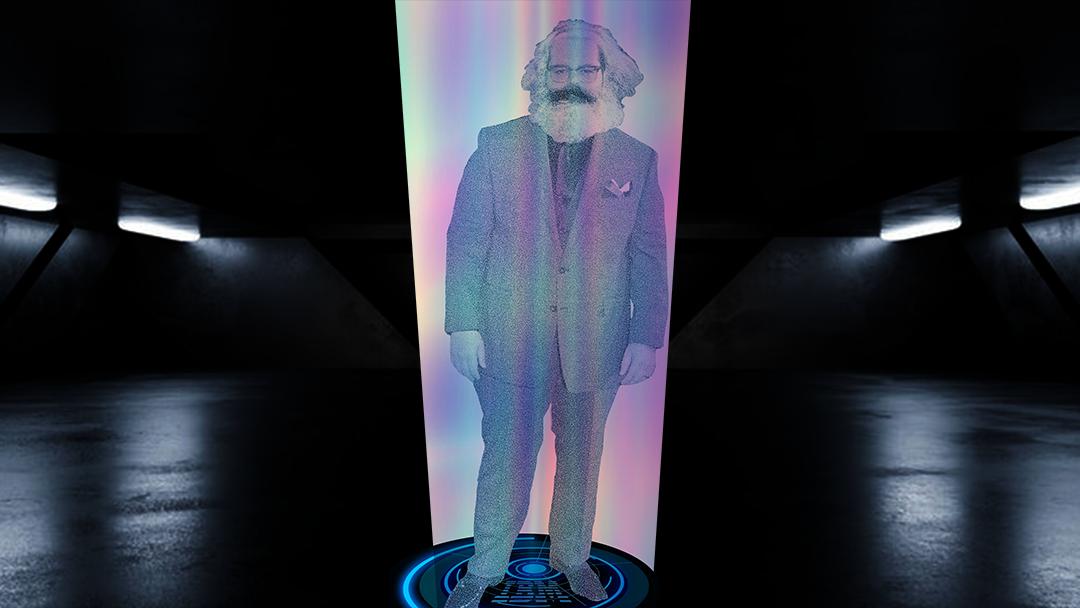 The rise of TikTok has made one thing clear: Gen Z really loves TikTok.

It has, however, made one thing far less clear: why is so much of Gen Z’s TikTok content anti-capitalist, espousing the tenets of Socialism in a clear, common sense way? And more importantly, what would Karl Marx think of it all?

As a geriatric Millennial who feels a particular kinship with Gen X because all of my friends in high school were the seniors I sat with at lunch when I was a freshman, the answers to this one don’t come easy. While there have been several Salon pieces written by former Paste magazine writers that attempt to understand what Marx would make of this socialist media phenomenon, they miss the mark for people like me who went to public school and never learned how to read serif fonts.

Luckily, we no longer need a prominent graduate of the NYU Gallatin School of Individualized Studies interpretation of Das Kapital to discern Marx’s own feelings on the popularity of Marxist theory with Zoomers. We can go straight to the source and ask him ourselves by visiting The IBM-Powered Karl Marx hologram at the IBM headquarters in Armonk, NY.

We’re able to do this thanks to a collaboration between David Koch’s Americans for Prosperity, Neera Tanden’s Center for American Progress, IBM, and lots of cocaine. In the leadup to the 2020 Democratic Primary, Americans for Prosperity and CAP noticed the rising popularity of left-wing, overtly Socialist ideals in the younger generation. They came together, despite their differences over corn, because they wanted all Americans to understand the full impact these principles could have on the continued ability for Americans who graduate from Georgetown to fail up into our government long enough that they come out on the other side with their own Netflix deal, a seat on the Board of Trustees for a Christian chess academy, or, if they work hard enough, lead the hot dog lobby’s effort to get hot dogs into baby formula. They sought out the help of IBM to clarify the positions of Karl Marx himself in order to better educate all Americans on what the implementation of those ideas would mean for the average person who’s been on a yacht before age 18.

The first thing you notice when you walk into the atrium of the APxCAP wing at IBM headquarters is a giant black cube engraved with “The IBM-Powered Karl Marx Hologram is funded by Freedom,” and if you’re like me (a LinkedIn power user who has a great story about the time he met HootSuite CEO Ryan Holmes at an adult bris), you can’t help but think, “wow I bet Karl Marx would like this big black cube with this engraving on it. This hologram must be the real deal.”

Just past the Naught by Nature “Down with TPP” exhibit is the entrance to the IBM-Powered Marx Hologram room, designed to look like David Koch’s favorite multiplayer map from GoldenEye (it’s up to you to guess which one he’s going for). Only one person is allowed in at a time, and you may only ask the hologram one question before an attendant who was clearly hired because he looks exactly like the Bond villain Oddjob forces you to leave. As I walk up to the empty pedestal and wait for one of the most consequential philosophers of the last 200 years to boot up (the hologram requires a hard reboot after each question to prevent it from becoming dangerously sentient), I notice a man in a small room 15 feet away sitting in front of a keyboard, a microphone, and a screen that appears to be live footage of me standing in front of the Marx pedestal. He catches my eyes and closes the curtain. Oddjob assured me as I left that “was just an NSA agent” and that this hologram is “definitely not a Wizard of Oz situation.” Apparently, security surrounding the hologram is very tight.

A hum fills the room after the curtain has closed, and a blue light appears atop the pedestal. Suddenly, music that sounds exactly like the kind of music I heard when I celebrated Oktoberfest at a Midtown beer garden run by Lithuanians plays. I am later told that this is “The Hymn of the Proletariat,” and Weird Al provided all backing accordion on the festive track. As the music plays on, a disheveled older gentleman in a shabby suit appears before me. I am now looking upon the visage of Karl Marx himself, though I must admit the likeness is not exact—it appears to be Josh Gad with white hair and a beard (I am later assured that I am both wrong and stupid for thinking that).

“I am the father of Marxism, Karl Marx. You come before me seeking my perspective on the events of the world today. This is made possible by IBM, home to the revolutionary POWER10 processor and hospice care provider to my personal friend and confidant, ASIMO. You may now ask me your question.”

The moment has finally arrived. I ask the hologram, “Mr. Marx, what do you make of the popularity of Socialist theory amongst Zoomers creating content on TikTok?”

I would later learn that the Karl Marx hologram is only capable of answering yes or no questions at this time, though IBM has promised that the hologram will be capable of more complexity by the end of 2021 when they introduce programming that allows it to do Jeff Foxworthy-style jokes about Marxism as well as limited crowd work targeted at short people.

Despite the lack of nuance available in his answer, one thing is clear, Zoomers: Karl Marx (as dictated by an IBM-powered hologram, funded by APxCAP) does not approve.