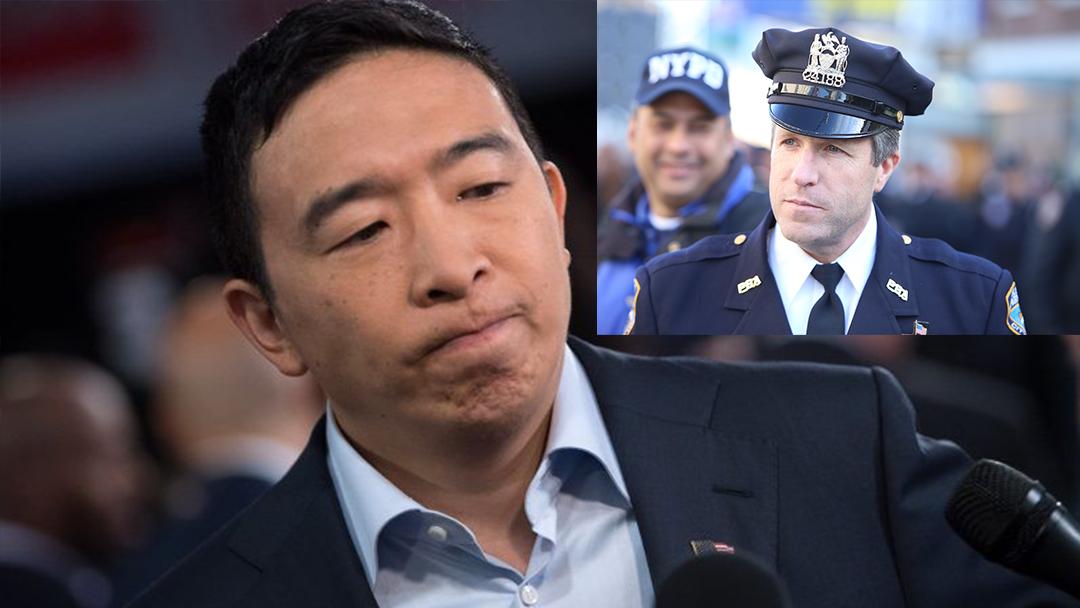 LET’S GET STRAIGHT TO IT: I like Andrew Yang for Mayor of NYC.

Now, my boys in blue are probably shocked straight through to their sphincter to see me support a cop-hating Democrat. I mean, aren’t I the guy who behaves like he’s the Jimmy Hoffa of the police if Jimmy Hoffa was a proud narc and significantly shorter? That’s still me, guys. I bleed blue (double meaning due to colloidal silver poisoning), I support the right of the police to beat the shit out of agitators (protestors, activists, queer people), and I ground beef-load every single day like I’m training for a heart-attack marathon. I am still the foaming-at-the-mouth PBA President you know and love.

The thing is, I’ve met guys like Andrew Yang before. You know the type: sort of nice, easy-going dunce, definitely wore Google Glasses in public, read half of a Malcolm Gladwell book once. If you start any sentence in front of him with “did you know,” he’ll 100% believe it even if it is an obvious lie. These guys are easy to manipulate. He won’t even know I’m waging psychological warfare on his fragile mind.

Let’s say it’s his first month in office and Black Lives Matter decides they need to protest due to so-called “blatant police brutality that was clearly captured on video.” Now, Yang may find himself saying something anti-police like “we should look into having these officers prosecuted and we need reform.” All I have to do is send a Twitter direct message and say, “Hey Mister Mayor, did you know that when you prosecute officers, they get sad? They talked about it on an episode of Freakonomics.” And he takes it back the next day, guaranteed.

Now, obviously this man will be under constant pressure from external forces attempting to influence him, including radical communists who want to turn our pensions into a community vegan garden (Kale only! No tomatoes!). There will be calls to cut the police budget, and if Andrew Yang even hints that he’s “open” to making changes to our budget that don’t double it? Well, that’s an easy one. I comment on his latest Venmo payment for cheeseburgers at Dave & Busters with, “I hope you understand that if you cut our budget, the rst thing we stop protecting is the Times Square Dave & Busters, a place that is a known high-value target of radical, leftist anti-gaming terrorists. Be smart. Be safe. Eat, drink, play.”

It’s that simple, my friends. Who needs meetings, hearings, lobbying, etc., when we could have a mayor that is so easily swayed by anything he could qualify on Twitter as “people are saying defunding the police could be dangerous and I hate danger. I love to eat, drink, play with my friends.” I urge my fellow o icers: vote for Andrew Yang if you want to see the status quo continue in New York City. He may not explicitly condemn these dog shit socialist ass lickers, but he’ll do our bidding. Also he’ll probably give us the money to buy a Robocop without having to even ask for it. I’ve always wanted a Robocop.