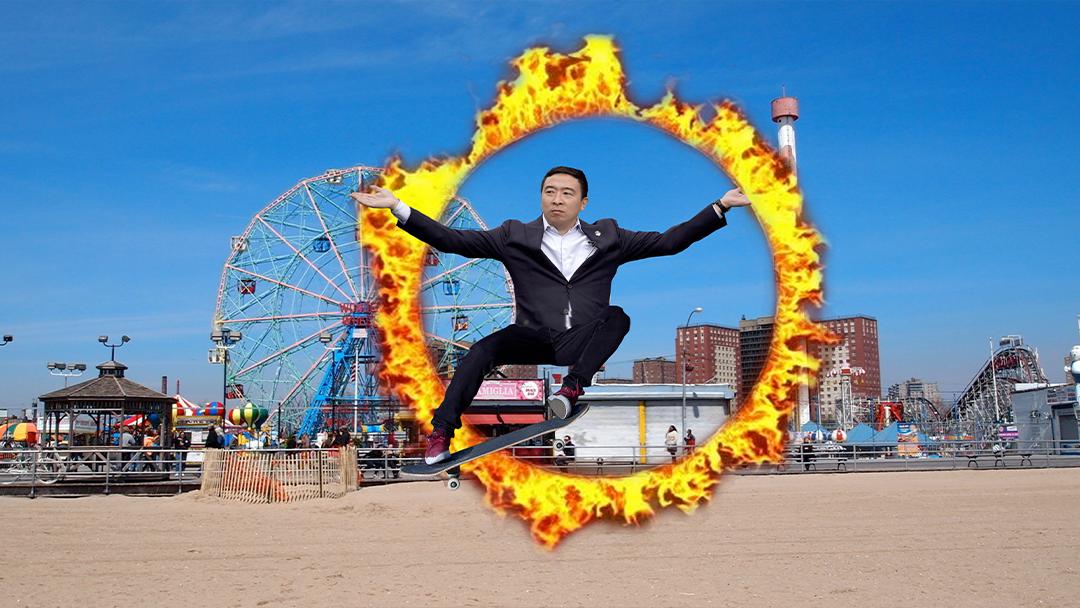 NEW YORK, NY – Presidential hopeful-turned-Big Apple mayoral candidate Andrew Yang announced his would-be celebratory plans for the upcoming New York primary race. On Thursday morning, he told NY1 that he plans to “ollie through a ring of fire on Coney Island” if he’s victorious in June, despite experts agreeing “he’ll definitely explode” and “technically there is still a general election in November.”

“He kept saying, ‘on a skateboard,’ and we were like, yeah dude, we know what an ollie is,” said one Brooklyn resident. “That guy is weird.”

After his on-air pledge, Yang jumped into the small gathering crowd with a can of Reddi-Wip. “Who wants a squirt!?!?” he screamed at the terrified onlookers. When no one volunteered, he began pumping his own mouth full of the dairy topping until he choked. An aide gave him a firm slap on the back, and he vomited onto the sidewalk, giggling maniacally. Yang then jumped onto a BMX bike and rode directly into a brick wall. The crowd quickly dispersed, with some saying the event was “so pathetic it made me depressed.”

After Yang’s bizarre departure, Functionally Dead caught up with some experts to weigh in on his extreme vow. Pam Highlighter- Moore, a motion physics professor at Hunter College, said this of the candidate’s plans: “the arced ollie motion at a low altitude within close proximity to sustained flames could be very dangerous. If Yang does in fact attempt this feat, he will more than likely explode, especially given his propensity to hoard highly-pressurized cans of nitrous-based spray foods on his person.”

Pedro Camden, a dynamics coach at the Columbia School of Medicine, also chimed in: “those blue suits are highly flammable, and the kinetic friction created by an amateur athlete will spell disaster. By disaster I mean explosion. He will explode.”

When pressed for comment on the bombastic stunt, Yang’s camp sent Functionally Dead a Signal message that read simply “COWABUNGA.”