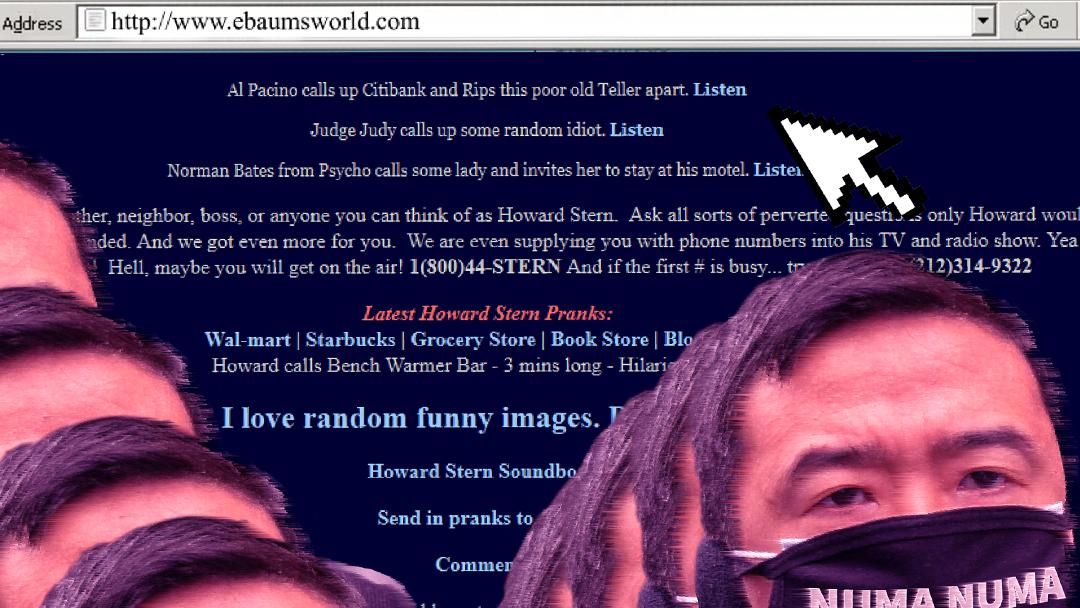 Much attention has been given to Andrew Yang’s ingenious proposal to gut existing welfare benefits to institute a version of Universal Basic Income that would pay about 500,000 of the poorest New Yorkers as much as $2,000 a year, and understandably so. It would be freakin’ epic! But let’s break down one of Yang’s lesser-known, but equally impactful, equally l33t policy goals. Not many people know this, but Ebaumsworld Corporate maintains its headquarters in Brooklyn. However, Andrew Yang has been acutely aware of this fact since he first read their Wikipedia page while microwaving a piece of bacon-wrapped bacon one year ago. During a time when many have lost their jobs, Yang wants to mobilize New Yorkers to get back to work on a project no one else thinks is a good idea. Andrew Yang has a plan to restore Ebaumsworld to its former, 2004, Adobe Flash-heavy glory, making the Big Apple a hub for creators interested in this massive public works program.

With the advent of Clubhouse, a voice chat app for marketing guys upset they never had a chance to do a TEDx Talk, the opportunity to partner with an app that guarantees to be a tech mainstay for at least another 9 months is ripe. That’s why Andrew Yang proposes courting young tech-minded individuals (preferably out of state) to work with Ebaumsworld to create seamless integration between the Clubhouse app and the Arnold Schwarzenegger soundboards you know and love from the year 2003. The next time you engage in an impromptu panel discussion with the Head of Product at Gorgeous Spoon, you’ll have the option to respond with an inspired “get to the choppa,” much to the amusement of your colleagues, or at the very least, yourself.

Some would say that gaming in 2021 has left websites like Ebaumsworld squarely in its dust. Those same people seem to forget the cultural importance of “Leeroy Jenkins,” the username of the infamous World of Warcraft player who changed the world by simply shouting his name and jumping around during a raid. That is why Yang is proposing a $10 billion dollar investment in the Leeroy Jenkins Memorial E-Rena. Professional gaming will have a permanent home in BedStuy thanks to the wonders of eminent domain.

Did you know that one of the contributing factors to Ebaumsworld’s unfortunate decline was a series of legal actions by the supposed “original creators'' of the “content” that Ebaumsworld placed a watermark on and published without attribution? These litigious acts made it much harder for a place like Ebaumsworld to compete just as YouTube was coming into its prime. With help from the City Council, Andrew Yang would grant special waivers to Ebaumsworld that allows it to publish any content without fear of legal action. Over your monthly limit for New Yorker articles and don’t want to pay? Go to Ebaumsworld. Want to watch the latest Marvel movie for free? Ebaumsworld. Did someone leak un-redacted CIA documents on the Kennedy assasination? It’s going straight up on Ebaumsworld. The ethical concern to credit and pay people for their work should not be driving a wedge in a website’s ability to turn an 80% profit margin.

It would be kind of cool.

Most would tell you that the days of Flash animation are long-dead given that Adobe has discontinued support… but what if we gave Adobe, Google, and Apple tax-incentives to revive Flash animation “for the memes?” That’s just what Yang is proposing, promising Google, Adobe, Apple, and Zombo.com massive tax breaks if they reignite their support for Flash despite the glaring security issues associated with the software. And this, in turn, can only be good for New York City as the world thanks the City at Never Sleeps for making the web 2003 again. All your base are belong to NYC, baby!