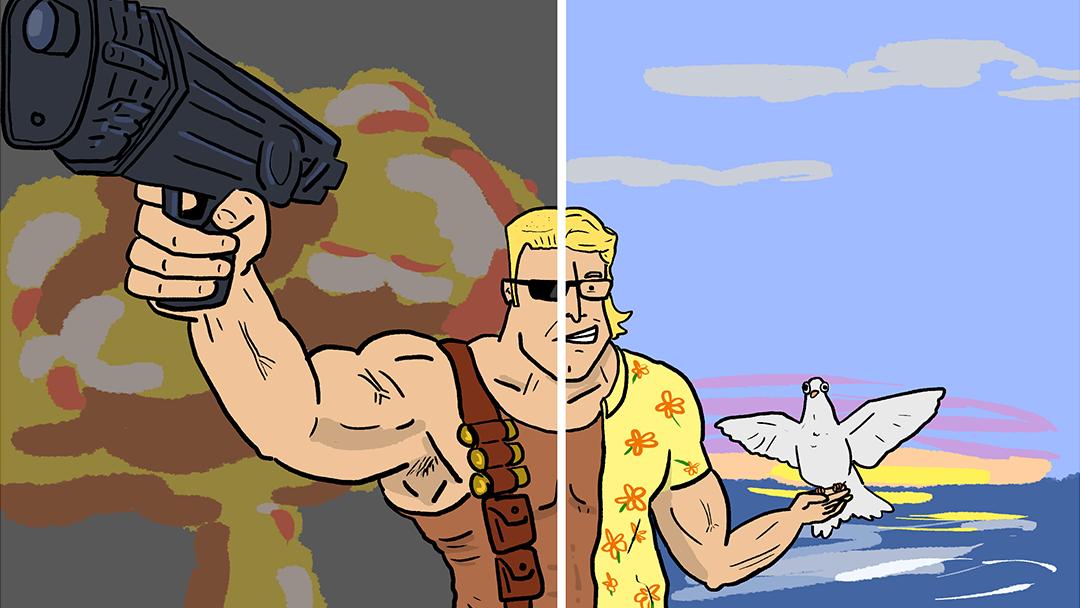 There comes a time in every man’s life when he takes a long, hard look at himself and thinks: am I who I want to be? For me, Duke Nukem, that time is now. The current environment has been a wake-up call to men like me. When governors, Congressmen, and other important figures are being accused of willful misconduct, the uber-macho action hero community needs to pay attention. It is imperative that we take stock of our past mistakes and think about how we may have abused the privilege that comes with being a cishet white man.

And I can tell you that I, Duke Nukem, have a lot to apologize for.

First of all, my endless slaughter of aliens, Techbots, and random bystanders. Nothing can excuse this. I have murdered hundreds, possibly even thousands, of people, often while making quips. Quips that I will fully admit are not even that good. Sometimes I just repeat lines from movies I’ve seen, which is not at all clever or creative.

At the time, I felt the violence I inflicted on others was justified. I felt that I had the right to hurt others because of how powerful it made me feel, how it made me think I was in charge, and because of Dr. Proton’s imminent plans to conquer Earth. Nothing could be further from the truth. I mean, do any of you even remember Dr. Proton?

Those deaths are on my hands, and I take full responsibility.

Secondly, I would like to address my treatment of women. Across all my adventures on Earth, through space and even time itself, I have viewed women as objects rather than autonomous characters with their own thoughts, goals, and plot-lines. This is unacceptable.

Too much of my time has been spent in strip clubs (which can be a valid expression of female sexual agency, but not the ones I went to), watching non-feminist pornography, and leering at the Holsom Twins before they exploded, giving birth to hideous Octabrains.

But more than anything, I need to address the abuse of my unearned status. As a person who has almost unlimited privilege in society, I have used it—and the almost unlimited ammo that tends to just be lying around for the taking—and abused it to indulge myself in the most toxic of ways.

I threw money at women to make them expose their breasts.

I have long-held regressive and hostile attitudes towards illegal aliens, though I feel I must make it clear that I am referring to actual extraterrestrials and not human immigrants. But to be fair, I haven’t really been on the right side of the immigration debate, either.

Even when I was literally saving the world, I have to admit it had far more to do with my fragile male ego than nobly standing up to pig cops (again, to be clear, I am referring to the actual humanoid boars wearing police uniforms, not officers of the law. As one of the largest individual donors to police unions, I was on the wrong side of history again).

Accountability is a difficult task, and I recognize that there is a hard journey ahead of me.

It takes a lot to acknowledge your past behavior. It takes even more to ask forgiveness.

But in light of the many, many current allegations and lawsuits against me, I can only earnestly ask for it. And really, at this point, I feel like you’re obligated to give it to me. I deserve it. If you don’t, you’re really being just awful and unfair. C’mon, I said I was sorry. If anything, you’re the one that should be apologizing for that kind of behavior.

By the way, I also apologize for tearing that dude’s head off and shitting down his neck. Good enough? What more do you want from me?

Nathan Kamal is a writer and comic performer based in Chicago, IL. For more information, go to nathankamalwriting.com or look to the stars in wonder. Instagram: https://www.instagram.com/nathankamal