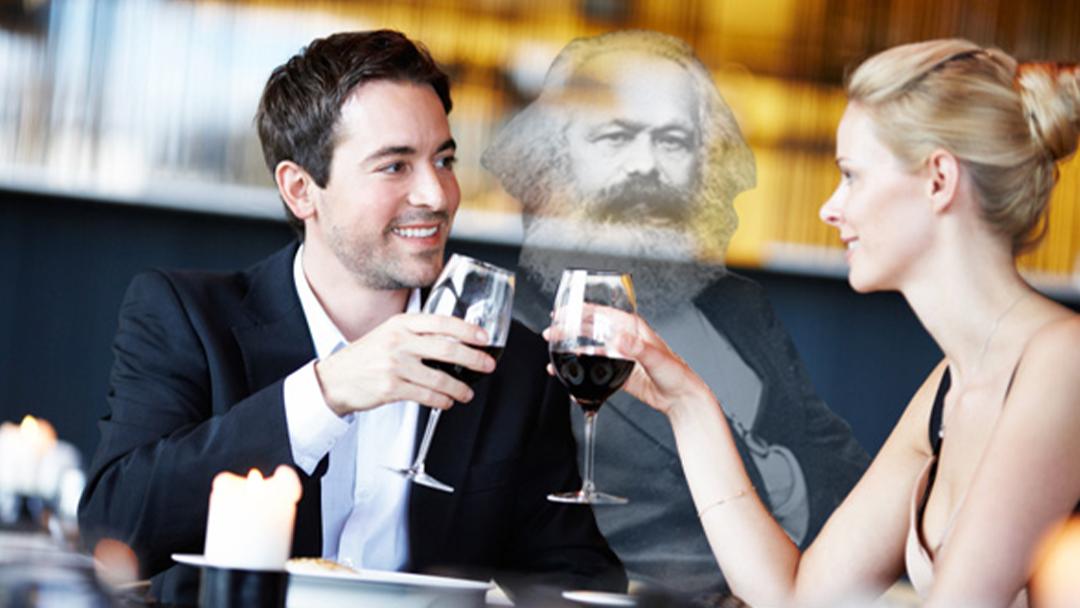 We’ve all been there. You’ve deleted-and-redownloaded dating apps for the 87th time this month in a feeble attempt to get over your ex and you said yes to the first guy you match with. His profile said “Moderate,” but like, maybe that’s just coded language for a Trotskyist. Either way, your targeted Instagram ads for oversized t-shirts featuring inspirational quotes keep telling you to put yourself out there, so it couldn’t hurt, right?

You meet him at the restaurant and awkwardly extend your hand (does anyone really know how to greet people during COVID?), and he goes in for a weird forceful hug that involves grazing your lower back for some reason. Unapologetically, he turns and announces that he has a reservation for two to the hostess, who politely asks him to repeat the name. He then proceeds to pull down his mask and over-enunciate while ensuring particles of saliva ricochet off the plexiglass. He notices your stark eyebrow raise and assures you in a condescending tone:

“Don’t worry, I have the antibodies,” he winks.

You’re finally seated in the awkward table that’s in the middle of a busy sidewalk, and the server comes over. Tinder Man insists on the extensive wine list being read aloud to both of you in excruciating detail. After the fifth exhausting explanation of a Bordeaux’s origin, you interject:

“I mean, does it really matter? It’s all the same. The pricier places just probably use more labor to make the wine anyway.” You realize quickly that this statement was the equivalent of throwing a stick of dynamite on the train tracks of the already doomed evening.

“You believe in the LABOR THEORY OF VALUE?!” he guffaws as the server shrinks away, having heard the same conversation dozens of times before. “Hey Econ 101, news flash: we believe in marginalism now. Labor alone doesn’t determine the quantitative value of a product. You’re literally embarrassing me in front of the server.” The server has, as previously mentioned, long since left.

How Do You Deal?

“I mean it’s more than just relative prices,” you calmly explain. “Most agree it continues to remain incredibly valuable in creating a holistic understanding of capitalism, and viewing work as production allows us to ask questions such as—”

“Please,” he cuts you off. “Value is completely subjective.” He scoffs as he adjusts the brightness on his Apple Watch. “Which reminds me, I need to track the status of my PS5. I got free overnighted Prime delivery, which I’m sure you would attribute to the long hours and LABOR of the oh-so-mistreated-Amazon employees, wouldn’t you?”

FOCUS ON YOUR MEAL ¶

You suffer through the main course as he drones on about the region of each steak knife and proceeds to talk about how drastically his second cousin who works on Wall Street took a major loss during the r/WallStreetBets debacle. Finally, the sweet relief of the check is presented as you both turn down dessert before the server has a chance to offer it.

He grabs the pen to sign the receipt. “I got it,” he mumbles under his breath. A sinking feeling enters your stomach.

DON’T ASK ABOUT THE TIP ¶

“How much are you tipping?” you ask.

“I mean, I just don’t really believe in that… coddling people with high wages isn’t really good for the race. Also, she mispronounced Bordeaux.”

GET THE FUCK OUT OF THERE ¶

In silence, you allow the Bezos Mini Me to escort you to your Uber. You go home and let out a cathartic cry and fall asleep with a glass of boxed wine in your hand and ASMR for Broken Hearts playing softly in the background, reminding yourself that next time you’ll perhaps start with an appetizer and a more palatable economic concept, like supply and demand.