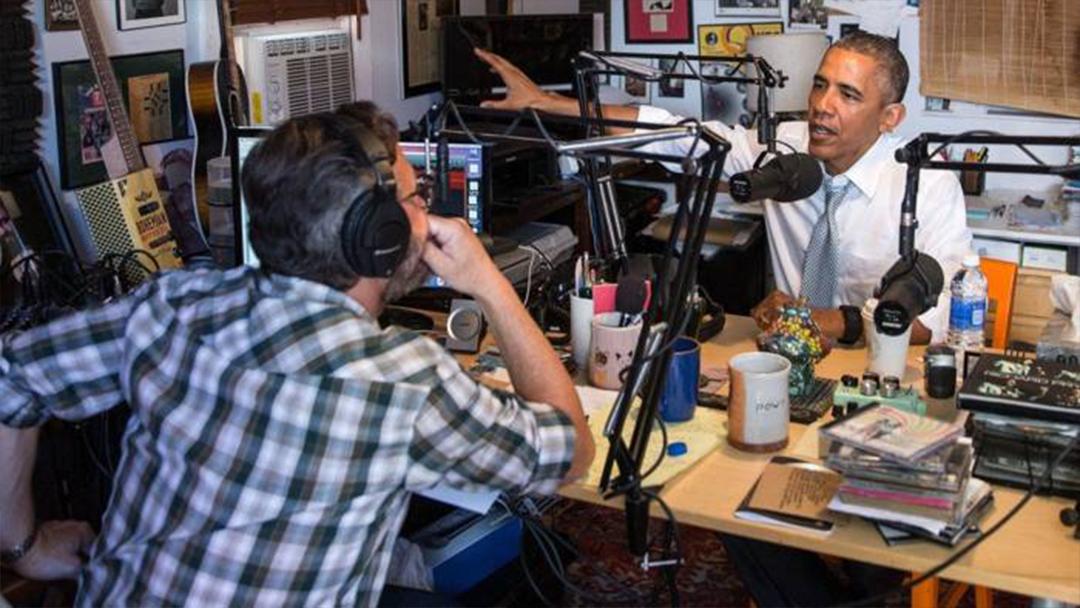 Unless you’ve been living under a rock, you’ve probably heard of the politics-to-podcast pipeline: a de-centralized campaign to recruit our country’s most prominent centrist politicians—innocent men and women who have helped quell single payer healthcare and bravely lead unprovoked bombings in the Middle East—and radicalize them into becoming content creators. It’s easy to hear Barack Obama lying to Bruce Springsteen about “really getting the message” behind “Born In The USA” or listen to Hillary Clinton read ad copy for Blue Chew and write them off as a small minority of cranks, whackos, and shitheads. But these people weren’t born content creators like most others in their field. Instead, they were sensible moderates who, thanks to steady exposure from sources like The Extended Crooked Mediaverse, were slow-y but surely indoctrinated to content creation. You hate to see it. So how does this politics-to-podcast pipeline work, and what can you do to dissuade the centrist politicians in your life from going down the dangerous path of interviewing Jake Paul about how to get young people registered to vote through TikTok?

Centrists don’t just sign a deal with Gimlet Media and become content creators overnight. No sensible person would decide to produce content for a living, especially not one in the highest echelons of power. Content creators quietly infiltrate popular centrist communities, such as the White House Correspondents dinner or The New York Times Editorial section. They make producing content seem benign, almost reasonable. They specifically target centrists who are alienated from their constituents, the ones who are so disliked and desperate for approval that they’ll blindly accept the content creator narrative—that they can become beloved by producing a Netflix documentary called The Aisle: a History of Bipartisanship.

Content creators seduce centrists not with their ideology, which is full of contradictions and objectively morally abhorrent, but with their affectations. Content creators use media personalities to repackage their belief system in a way that’s palatable to centrists. Fountains of charisma like Matt Yglesias, Nate Silver, and Ezra Klein lull centrists in with slickly written articles and convivial appearances on MSNBC. These guys, regardless of what you think of their beliefs, come off like the Keith Jagger and Mick Richards of politics, so it’s easy to see how they can take centrists down the dark path of joining the I Heart Radio Network.

Once centrists have shown interest in content creation, the recruiters switch tactics. They start to cut centrists off from their community—their think tanks, their NGOs, and even the people whose main job is to be the buffer between them and their low level staffers. The centrists become isolated, and previously abnormal behaviors, such as streaming Fortnite with Dr Disrespect to discuss the benefits of escalating to a hot war with China, become all too common place.

What Can You Do? ¶

How can you prevent centrists, who are definitely using their political capital to protect the rights of the most vulnerable citizens and not just cynically out to make a quick buck, from being seduced by content creators? Studies have shown that the the most reliable way of bringing centrists back to normal is not through passionate debate or even replacing them with leftists, but through donations. Donate to their campaigns and their highly suspect non-profits. Show them that a lifetime of gaming the algorithm with YouTube thumbnails of their mouths open in shock in front of a picture of Donald Trump Photoshopped on Kylo Ren’s body isn’t their only option. Money talks, so please, talk loudly. No one wants to see Neera Tanden attempt to put her “raw, uncov-ered” views on single payer healthcare up on OnlyFans.