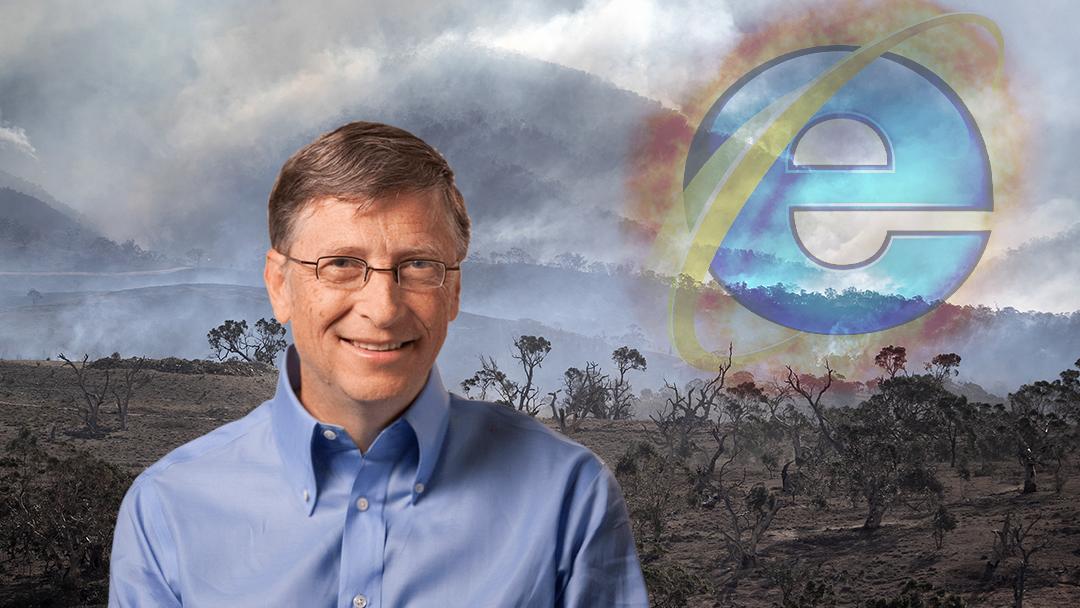 I am going to be blunt with you: we are currently in the midst of a world war. No, it’s not against China or Iran or one of those countries that’s profitable to bomb, but against greenhouse gases and carbon emissions.

As I said recently on Reddit, the message board where you can give gold to a post that’s sufficiently racist, we are going to have to look to radical solutions to the looming climate crisis. Not radical in the sense of a wealth tax, the Green New Deal, ending American imperialism, or reducing the outrageous consumption of precious natural resources by billionaires and multinational corporations—radical meaning we are going to have to turn to Big Tech to make the world a better place, just as they always have. And who better to lead the fight against climate change than me, the man behind Internet Explorder?

When I was the CEO at Microsoft, I used my extraordinary intellect to solve the big problems facing the general public. In the early nineties, I took one look at the Internet and said, “there has to be some way you can explorde all that.” And voilà, Internet Explorder, the web browser that never worked right, was born. Internet Explorder was the solution to the question, “how can we make browsing the web feel so repulsive that it slows down the rate of Internet adoption by at least 15 years?” It’s that kind of out-of-the-box thinking that made Microsoft unanimously loathed, and it’s the same kind we need if we’re going to have a fighting chance against climate change. We need someone as clever and innovative as me to come up with the Internet Explorder for the ozone layer, the prevailing issue surrounding climate change in 2021.

Mankind has never faced an enemy quite like climate change before. We need to bring together the top minds from all across the globe, such as me, the guy who made a web browser that was so bad it forced the government to break up my monopoly. Think about it—if Internet Explorder had worked even one iota better,people would have just grudgingly accepted its ubiquitous presence in their lives. like they do with Comcast and those boxer briefs with the giant dick holes in the front. But no, my browser was so slow and crashed so often that the government had to intervene. They said “enough of this,” slapped me on my boney little ass, and sent me on my merry way so they could get cracking on the Bush tax cuts. That’s the kind of person who needs to be at the forefront of this existential threat.

I’m not saying it’s going to be easy. It’s going to take every ounce of talent, gumption, and ingenuity I have, and without the profit motive I had back at Microsoft, it’s going to be extra hard to muster up the desire to do anything. But rest assured, you’re in good hands—Internet Explorder hands. And not just Internet Explorder hands, but Windows Visto hands, the Zude music player hands, Clipsy the Microsoft Ossoff Assistant hands, and the original Xbonx that broke if you tried to play Morrowind hands. Together, with me making every important decision, we can blue screen of death/red ring of death climate change. You’re putting the future of our planet in the hands of a man that, in the most charitable reading of things, was friends with Jeffery Epstein for years and never thought anything was weird or wrong. And nothing should make you feel more at ease.